Benzene is a colourless liquid hydrocarbon, C6H6, b.p. 80 °C. It is now made from petroleum by catalytic reforming (formerly obtained from coal tar). Benzene is the archetypal aromatic compound. It has an unsaturated molecule, yet will not readily undergo addition reactions. On the other hand, it does undergo substitution reactions in which hydrogen atoms are replaced by other atoms or groups.

In 1865, Friedrich August Kekulé purposed the benzene molecule structure as a hexagonal ring which consists of six carbon atoms with alternate carbon-carbon single and carbon-carbon double bond. But such a structure should be highly reactive, and so didn't account for the unreactive nature of benzene. We now know that the best representation for the structure of benzene is indeed, hexagonal, with each C-C bond distance being identical and intermediate between those for a single and double bond. The π-orbitals from each neighbouring carbon atom overlap to form a delocalised molecular orbital which extends around the ring, giving added stability and with it, decreased reactivity. That is the reason the structural formula of benzene represents as a hexagon with a circle in the center which represents the delocalized electrons. 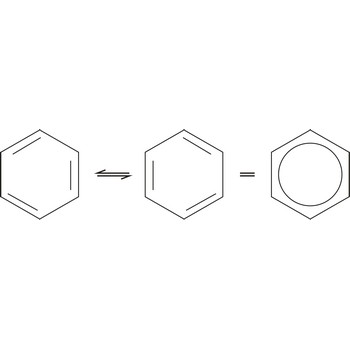