Zwitterion, also known as inner salt or dipolar ion, is an ion with a positive and a negative electrical charge at different locations within a molecule. As the molecule contains two opposite charges, it is electrically neutral. The term zwitterion is derived from the German word zwitter, meaning a hybrid, hermaphrodite. Zwitterions can be formed from compounds that contain both acid groups and base groups in their molecules (ampholytes).

All of the common amino acids found in proteins are ampholytes because they contain a carboxyl group (-COOH) that acts as an acid and an amino group (-NH2) that acts as a base. In the solid state, amino acids exist in the dipolar or zwitterion form. If acid is added to a solution containing the zwitterion, the carboxylate group captures a hydrogen (H+) ion, and the amino acid becomes positively charged. If base is added, ion removal of the H+ ion from the amino group of the zwitterion produces a negatively charged amino acid. 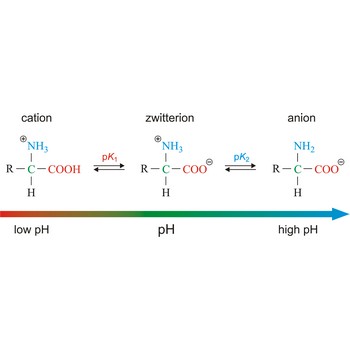