Spin is the intrinsic angular momentum of an elementary particle, or system of particles such as nucleus, that is also responsible for the magnetic moment; or, a particle or nucleus possessing such a spin. The spins of nuclei have characteristic fixed values. Pairs of neutrons and protons align to cancel out their spins, so that nuclei with an odd number of neutrons and/or protons will have a net non-zero rotational component characterized by a non-zero quantum nuclear spin number.

Stern-Gerlach experiment: a beam of silver atoms is split into two beams when it traverses a nonuniform magnetic field. Atoms with spin quantum number ms=+1/2 follow one trajectory, and those with ms=+1/2 follow another. 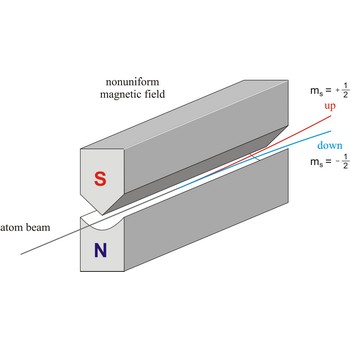