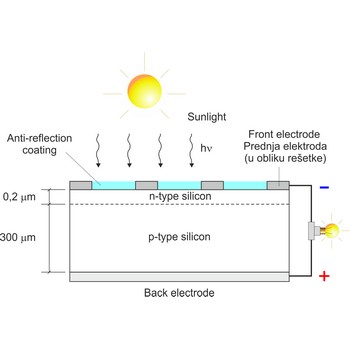 The photovoltaic effect involves the generation of mobile charge carriers-electrons and positively charged holes-by the absorption of a photon of light. This pair of charge carriers is produced when an electron in the highest filled electronic band of a semiconductor (the valence band) absorbs a photon of sufficient energy to promote it into the empty energy band (the conduction band). The excitation process can be induced only by a photon with an energy corresponding to the width of the energy gap that separates the valence and the conduction band. The creation of an electron-hole pair can be converted into the generation of an electrical current in a semiconductor junction device, wherein a layer of semiconducting material lies back to back with a layer of either a different semiconductor or a metal. In most photovoltaic cells, the junction is p-n junction, in which p-doped and n-doped semiconductors are married together. At the interface of the two, the predominance of positively charged carriers (holes) in the p-doped material and of negatively charged carriers (electrons) in the n-doped material sets up an electric field, which falls off to either side of the junction across a space-charge region. When absorption of a photon in this region generates an electron-hole pair, these charge carriers are driven in opposite directions by the electric field, i.e. away from the interface and toward the top and bottom of the two-layer structure, where metal electrodes on these faces collect the current. The electrode on the top layer (through which light is absorbed) is divided into strips so as not to obscure the semiconducting layers below. In most widely used commercial solar cells, the p-doped and n-doped semiconductive layers are formed within a monolithic piece of crystalline silicon. Silicon is able to absorb sunlight at those wavelengths at which it is most intense-from the near-infrared region (wavelengths of around 1200 nm) to the violet (around 350 nm).