The density of seawater is higher than that of fresh water because of its higher salinity. Seawater's freezing point is lower than that of pure water and its boiling point is higher. The average salinity of the ocean is 35 ‰, which means that for every kilograms of water, there are 35 g of salt. The relative abundance of the major salts in seawater are constant regardless of the ocean. Only six elements and compounds comprise about 99 % of sea salts: chlorine (Cl-), sodium (Na+), sulfur (SO42-), magnesium (Mg2+), calcium (Ca2+), and potassium (K+). 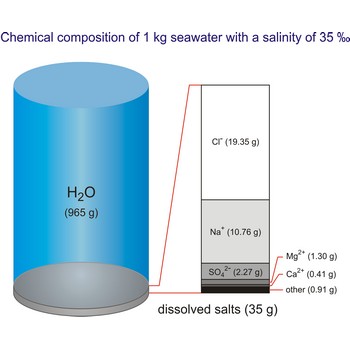