Ribonucleic acid is a complex organic compound in living cells that is concerned with protein synthesis. Plays an intermediary role in converting the information contained in DNA into proteins. RNA carries the genetic information from DNA to those parts of the cell where proteins are made. Some viruses store their genetic information as RNA not as DNA.

Ribonucleic acid is a similar molecule to DNA but with a slightly different structure.

The structural difference with DNA is that RNA contains a -OH group both at the 2' and 3' position of the ribose ring, whereas DNA (which stands, in fact, for deoxy-RNA) lacks such a hydroxy group at the 2' position of the ribose. The same bases can be attached to the ribose group in RNA as occur in DNA, with the exception that in RNA thymine does not occur, and is replaced by uracil, which has an H-group instead of a methyl group at the C-5 position of the pyrimidine. Unlike the double-stranded DNA molecule, RNA is a single-stranded molecule.

The three main functionally distinct varieties of RNA molecules are: (1) messenger RNA (mRNA) which is involved in the transmission of DNA information, (2) ribosomal RNa (rRNA) which makes up the physical machinery of the synthetic process, and (3) transfer RNA (tRNA) which also constitutes another functional part of the machinery of protein synthesis. 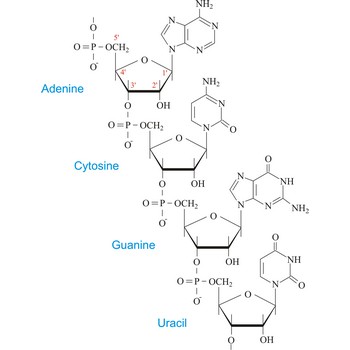