Proton is a stable elementary particle of unit positive charge and spin 1/2. Protons and neutrons, which are collectively called nucleons, are the constituents of the nucleus.

In 1886, German physicist Eugene Goldstein (1850-1930) discovered positive particles by using a modified Crookes tube with holes in the cathode in an evacuated tube. When cathode rays were given off in one direction toward the anode, other rays found their way through the holes in the cathode and sped off in the opposite direction. Since these other rays traveled in the direction opposite to the negatively charged cathode rays, it seemed that they must be composed of positively charged particles. Rutherford suggested that this fundamental positive particle be called the proton. 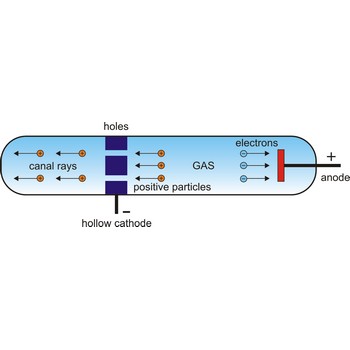