Monosaccharides are carbohydrates, with the general formula Cn(H2O)n, that cannot be decomposed to a simpler carbohydrates by hydrolysis.

Depending on whether the molecule contains an aldehyde group (-CHO) or a ketone group (-CO-) monosaccharide can be a polyhydroxy aldehyde (aldose) or a polyhydroxy ketone (ketose). These aldehyde and ketone groups confer reduction properties on monosaccharides. They are also classified according to the number of carbon atoms they contain: trioses have three carbon atoms, tetroses four, pentoses five, hexoses six, heptoses seven, etc. These two systems of classification are often combined. For example, a six-carbon polyhydroxy aldehyde such as D-glucose is an aldohexose, whereas a six-carbon polyhydroxy ketone such as D-fructose is a ketohexose.

The notations D and L are used to describe the configurations of carbohydrates. In Fischer projections of monosaccharides, the carbonyl group is always placed on top (in the case of aldoses) or as close to the top as possible (in the case of ketoses). If the OH group attached to the bottom-most asymmetric carbon (the carbon that is second from the bottom) is on the right, then the compound is a D-sugar. If the OH group is on the left, then the compound is an L-sugar. Almost all sugars found in nature are D-sugars.

Monosaccharides can exist as either straight-chain or ring-shaped molecules. During the conversion from straight-chain form to cyclic form, the carbon atom containing the carbonyl oxygen, called the anomeric carbon, becomes a chiral center with two possible configurations (anomers), α and β. When the stereochemistry of the first carbon matches the stereochemistry of the last stereogenic center the sugar is the α-anomer when they are opposite the sugar is the β-anomer. 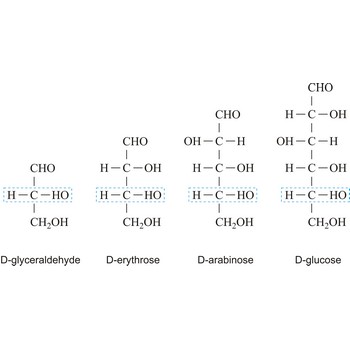