Ligand is an ion (F-, Cl-, Br-, I-, S2-, CN-, NCS-, OH-, NH2-) or molecule (NH3, H2O, NO, CO) that donates a pair of electrons to a metal atom or ion in forming a coordination complex. The main way of classifying ligands is by the number of points at which they are attached to, or bound to, the metal center. This is the denticity. Ligands with one potential donor atom are monodentate. Polydentate ligand is a ligand that is attached to a central metal ion by bonds from two or more donor atoms. Ligands with more than one potential donor atom are known as ambidentate, such as the thiocyanate ion, NCS-, which can bind to the metal center with either the nitrogen or sulphur atoms. Chelating ligands are those polydentate ligands which can form a ring including the metal atom. 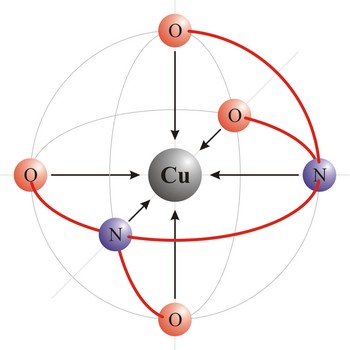