Histidine is an electrically charged amino acids with basic side chains. It is an essential amino acid, which means that humans cannot synthesize it, so it must be ingested. Histidine is perhaps the most common and versatile catalytic residue in proteins. The imidazole sidechain of histidine has a pKa of approximately 6.0. This means that, at physiologically relevant pH values, relatively small shifts in pH will change its average charge. The unprotonated imidazole is nucleophilic and can serve as a general base, while the protonated form can serve as a general acid. In addition, it is often a ligand for transition metal ions such as iron and zinc. 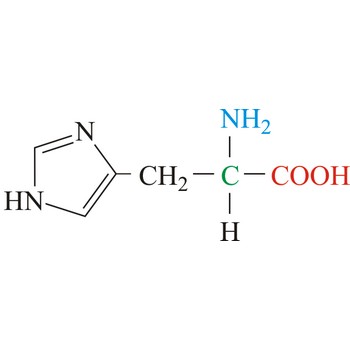