Graphite is an allotrope of carbon. The atoms are arranged in layers as a series of flat, hexagonal rings. Graphite is a good conductor of heat and electricity. The layers cleave easily, making graphite useful as a solid lubricant. A process to make pure synthetic graphite was invented by the American chemist Edward Goodrich Acheson (1856–1931). The process consists of heating a mixture of clay (aluminum silicate) and powdered coke (carbon) in an iron bowl. The reaction involves the production of silicon carbide, which loses silicon at 4150 °C to leave graphite. 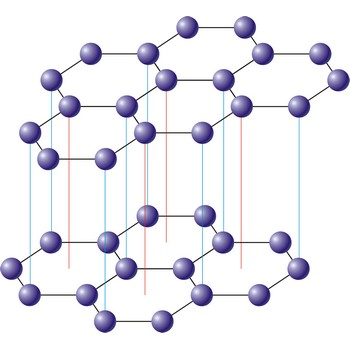