Glycoside is one of a group of organic compounds in which a sugar group is bonded through its anomeric carbon to another group via a glycosidic bond. The sugar group is known as the glycon and the non-sugar group as the aglycon. According to the IUPAC definition, all disaccharides and polysaccharides are glycosides where the aglycone is another sugar.

In the free hemiacetal form, sugars will spontaneously equilibrate between the α and β anomers. However, once the glycosidic bond is formed, the anomeric configuration of the ring is locked as either α or β. Therefore, the alpha and beta glycosides are chemically distinct. They will have different chemical, physical, and biological properties. Many glycosides occur abundantly in plants, especially as flower and fruit pigments.

The term glycoside was later extended to cover not only compounds in which the anomeric hydroxy group is replaced by a group -OR, but also those in which the replacing group is -SR (thioglycosides), -SeR (selenoglycosides), -NR1R2 (N-glycosides), or even -CR1R2R3 (C-glycosides). Thioglycoside and selenoglycoside are legitimate generic terms; however the use of N-glycoside, although widespread in biochemical literature, is improper and not recommended here (glycosylamine is a perfectly acceptable term). C-Glycoside is even less acceptable. All other glycosides are hydrolysable; the C-C bond of C-glycosides is usually not. The use and propagation of names based on C-glycoside terminology is therefore strongly discouraged. 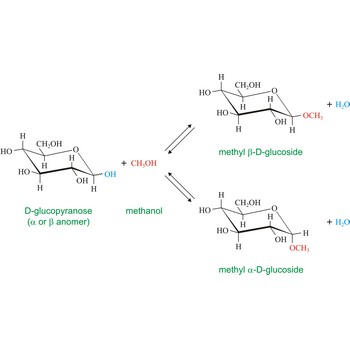