Global warming or greenhouse effect is an effect occurring in the atmosphere because of the presence of certain gases (greenhouse gases) that absorb infrared radiation. Light and ultraviolet radiation from the sun is able to penetrate the atmosphere and warm the Earth’s surface. This energy is re-radiated as infrared radiation which because of its longer wavelength, is absorbed by such substances as carbon dioxide. The overall effect is that the average temperature of the Earth and its atmosphere is increasing (so-called global Warming). The effect is similar to that occurring in a greenhouse, where light and long-wavelength ultraviolet radiation can pass through the glass into greenhouse but the infrared radiation is absorbed by the glass and part of it is re-radiated into the greenhouse.

The greenhouse effect is seen as a major environmental hazard. Average increases in temperature could change weather patterns and agricultural output. It might also lead to melting of the polar ice caps and a corresponding rise in sea level. Carbon dioxide, from fossil-fuel power stations and car exhausts, is the main greenhouse gas. Other contributory pollutants are nitrogen oxides, ozone, methane, and chloroflourocarbons. 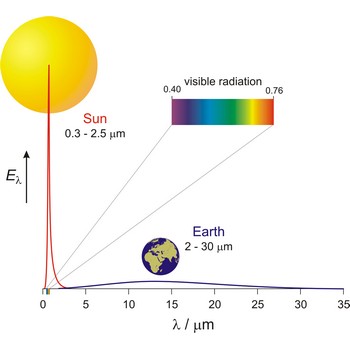