Fuel cell is a device that converts chemical energy into electrical energy. It is different from a battery in that the energy conversion continues as long as fuel and oxidising agent are fed to the fuel cell; that is, in principle indefinitely. (A battery is manufactured with a limited amount of chemicals, and it is exhausted when all the chemicals have reacted.) It is a galvanic cell where spontaneous chemical reactions occur at the electrodes. The fuel is oxidised at the anode, and the oxidising agent (almost always oxygen or air) is reduced at the cathode. Presently, the most commonly used fuel is hydrogen. More conventional fuels (e.g., petrol or natural gas) must be converted (reformed) into hydrogen before they can be utilised in a fuel cell. 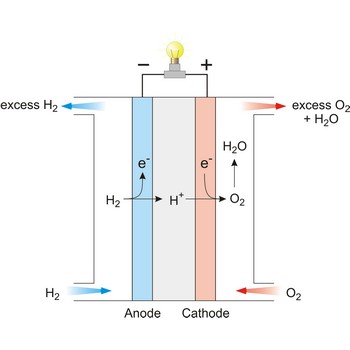