An essential feature of the electrochemical cell is that the simultaneously occurring oxidation-reduction reactions are spatially separated. E.g., in a spontaneous chemical reaction during the oxidation of hydrogen by oxygen to water, electrons are passed directly from the hydrogen to the oxygen.

In contrast, in the spontaneous electrochemical reaction in a galvanic cell the hydrogen is oxidised at the anode by transferring electrons to the anode and the oxygen is reduced at the cathode by accepting electrons from the cathode. The ions produced in the electrode reactions, in this case positive hydrogen ions and the negative hydroxyl (OH-) ions, will recombine in the solution to form the final product of the reaction: water. During this process the electrons are conducted from the anode to the cathode through an outside electric circuit where the electric current can drive a motor, light a light bulb, etc. The reaction can also be reversed: water can be decomposed into hydrogen and oxygen by the application of electrical power in an electrolytic cell. 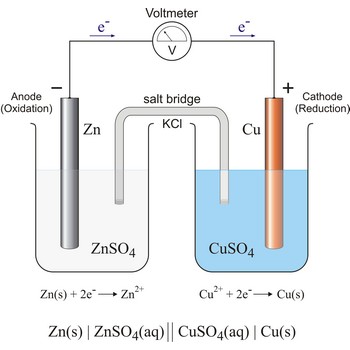