Deoxyribonucleic acid (DNA) is a nucleic acid with 2-deoxy-D-ribose as the sugar in its nucleotides. DNA contains encoded genetic information, specifically templates for the synthesis of all of an organism’s proteins and enzymes.

DNA was first identified in the 1869 by Swiss chemist Friedrich Miescher (1844-1895). In 1953, American biologist James Dewey Watson (1928-) and English physicist Francis Harry Compton Crick (1916–2004) had discovered that DNA occurs in the cell as a double helix, with two long strands of the molecule wound around each other, and further that the chemical structure of the molecule dictates that adenine (A) always aligns or pairs with thymine (T), and cytosine (C) always pairs with guanine (G). It is this base pairing that allows DNA in a cell to copy itself, and transfer its information to a new cell. The diameter of the helix is 2.0 nm and there is a residue on each chain every 0.34 nm in the z direction. The angle between each residue on the same strand is 36°, so that the structure repeats after 10 residues (3.4 nm) on each strand. 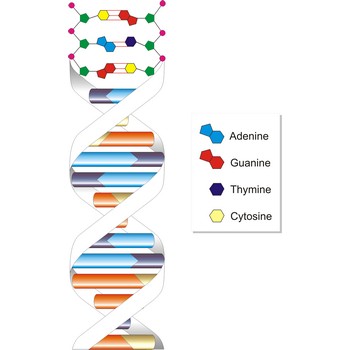