Carbohydrates (often called carbs for short) are polyhydroxy aldehydes or ketones, or substances that yield such compounds on hydrolysis. They are also known as saccharides, a term derived from the Latin word saccharum for sugar. Carbohydrates are the most abundant class of compounds in the biological world, making up more than 50 % of the dry weight of the Earth’s biomass. Every type of food we eat can have its energy traced back to a plant. Plants use carbon dioxide and water to make glucose, a simple sugar, in photosynthesis. Other carbohydrates such as cellulose and starch are made from the glucose. Light from the sun is absorbed by chlorophyll and this is converted to the energy necessary to biosynthesize carbohydrates

The term carbohydrate was applied originally to monosaccharides, in recognition of the fact that their empirical composition can be expressed as Cx(H2O)y. Later structural studies revealed that these compounds were not hydrates but the term carbohydrate persists. 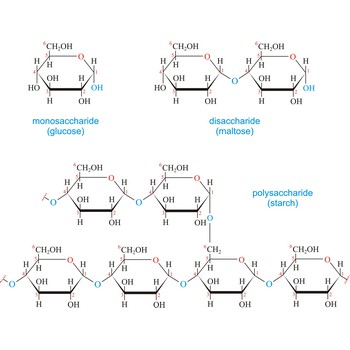