Bronze is an alloy made primarily of copper and tin. It may contain as much as 25 % tin. Bronzes with 10 % or more tin are harder, stronger, and resistant to corrosion. As bronze weathers, a brown or green film forms on the surface. This film inhibits corrosion. Silicon or aluminium is often added to bronze to improve resistance to corrosion. Phosphorus, lead, zinc, and other metals may be added for special purposes. The alloy is hard and easily cast and is extensively used in bearings, valves and other machine parts.

Bronze was one of the first alloys developed by ancient metal workers. The Bronze Age occurred in Europe around 2200 to 700 BC. Bronze was used for weapons such as spearheads, swords, and knives. Since ancient times, bronze has been the most popular metal for casting statues and other art objects. 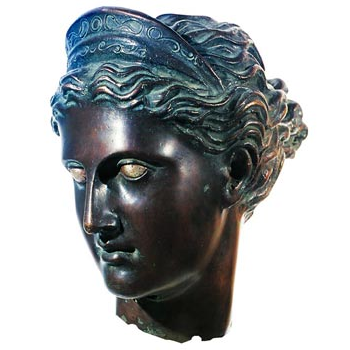 → Source: Town of Vis tourist board

The term bronze has been adopted commercially for many copper-rich alloys that contain little or no tin but are similar in colour to bronze, including aluminium bronze, manganese bronze, and silicon bronze. Aluminium bronze is used to make tools and, because it will not spark when struck. Manganese bronze is actually a brass that contains manganese. It is often used to make ship propellers because it is strong and resists corrosion by sea water.