Balance is an instrument to measure the mass (or weight) of a body. Balance beam type scales are the oldest type and measure weight using a fulcrum or pivot and a lever with the unknown weight placed on one end of the lever, and a counterweight applied to the other end. When the lever is balanced, the unknown weight and the counterweight are equal. The equal-arm balance consists of two identical pans hung from either end of a centrally suspended beam. The unequal-arm balance is made with one arm of the balance much longer than the other.

Electromagnetic force restoration balances also use a lever system but a magnetic field is used to generate the force on the opposite end of the lever and balance out the unknown mass. The current used to drive the magnetic coil is proportional to the mass of the object placed on the platform. 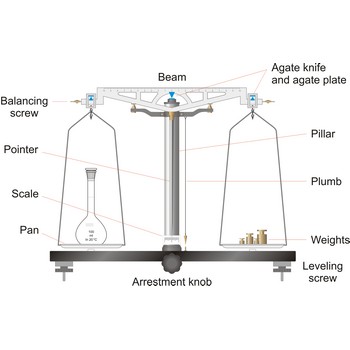