The working part of the balance is enclosed in a glass-fitted case. The baseplate is usually of black glass or black slate. The beam has agate knife-edges at its extremes, supporting stirrups from which balance pans are suspended. Another agate or steel knife-edge is fixed exactly in the middle of the beam on its bottom side. This knife-edge faces downwards and supports the beam. When not in use and during loading or unloading of the pans, the balance should be arrested. 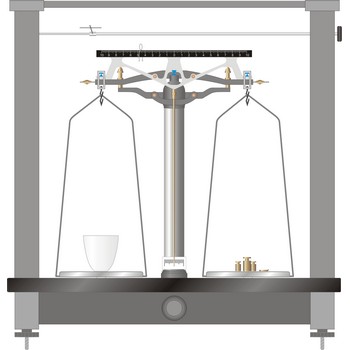 The principle of operation of a modern laboratory balance bears some resemblance to its predecessor - the equal arm balance. The older instrument opposed the torque exerted by an unknown mass on one side of a pivot to that of an adjustable known weight on the other side. When the pointer returned to the center position, the torques must be equal, and the weight was determined by the position of the moving weights.

Modern electronic laboratory balances work on the principle of magnetic force restoration. In this system, the force exerted by the object being weighed is lifted by an electromagnet. A detector measures the current required to oppose the downward motion of the weight in the magnetic field.