Soxhlet extractor is a laboratory apparatus designed to extract substances with a low solubility in the extracting solvent. The method described by the German chemist Franz von Soxhlet (1848-1926) in 1879 is the most commonly used example of a semi-continuous method applied to extraction of lipids from foods. In the Soxhlet extractor, the sample soaks in hot solvent that is periodically siphoned off, distilled and returned to the sample. During each cycle, a portion of the non-volatile compound dissolves in the solvent. After many cycles the desired compound is concentrated in the distillation flask. The solvent in the flask is then evaporated and the mass of the remaining lipid is measured. 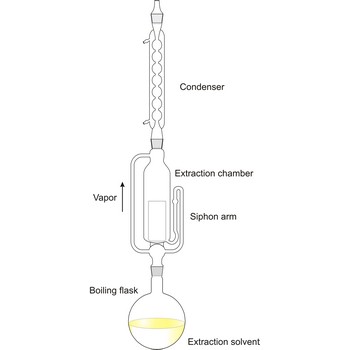