Ostwald viscometer, also known as U-tube viscometer or capillary viscometer is a device used to measure the viscosity of the liquid with a known density. The method of determining viscosity with this instrument consists of measuring the time for a known volume of the liquid (the volume contained between the marks A and B) to flow through the capillary under the influence of gravity. Ostwald viscometers named after the German chemist Wilhelm Ostwald (1853-1932).

The instrument must first be calibrated with materials of known viscosity such as pure (deionized) water. Knowing the value of viscosity of one liquid, one can calculate the viscosity of other liquid. 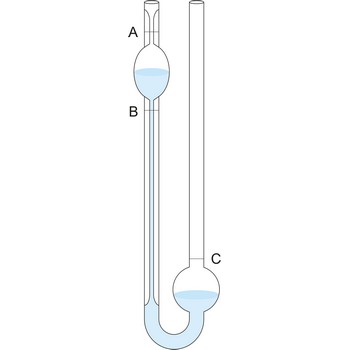