Grätzel solar cell is photoelectrochemical cell, developed by Michael Grätzel and collaborators, simulates some characteristics of the natural solar cell, which enables photosynthesis take place. In natural solar cell the chlorophyll molecules absorb light (most strongly in the red and blue parts of the spectrum, leaving the green light to be reflected). The absorbed energy is sufficient to knock an electron from the excited chlorophyll. In the further transport of electron, other molecules are involved, which take the electron away from chlorophyll. In Grätzel cell, the tasks of charge-carrier generation and transport are also assigned to different species. 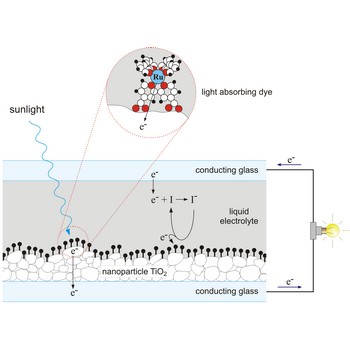 His device consists of an array of nanometre-sized crystallites of the semiconductor titanium dioxide, welded together and coated with light-sensitive molecules that can transfer electrons to the semiconductor particles when they absorb photons. So, light-sensitive molecules play a role equivalent to chlorophyll in photosynthesis. In Grätzel cell, the light-sensitive molecule is a ruthenium ion bound to organic bipyridine molecules, which absorb light strongly in the visible range; titanium dioxide nanocrystals carry the received photoexcited electrons away from electron donors. On the other hand, a donor molecule must get back an electron, so that it can absorb another photon. So, this assembly is immersed in a liquid electrolyte containing molecular species (dissolved iodine molecules) that can pick up an electron from an electrode immersed in the solution and ferry it to the donor molecule. These cells can convert sunlight with efficiency of 10 % in direct sunlight and they are even more efficient in diffuse daylight.