Ethyldiaminetetraacetic acid (C10H16N2O8) or shortened EDTA is a hexadentant ligand, and it forms chelates with both transition-metal ions and main-group ions. EDTA is used as a negative ion - EDTA4-. The diagram shows the structure of the ion with the important atoms picked out. The EDTA ion entirely wraps up a metal ion using all 6 of the positions. The co-ordination number is again 6 because of the 6 co-ordinate bonds being formed by the central metal ion.

EDTA is frequently used in soaps and detergents, because it forms a complexes with calcium and magnesium ions. These ions are in hard water and interfere with the cleaning action of soaps and detergents. EDTA is also used extensively as a stabilizing agent in the food industry and as an anticoagulant for stored blood in blood banks. EDTA is the most common reagent in complexometric titration. 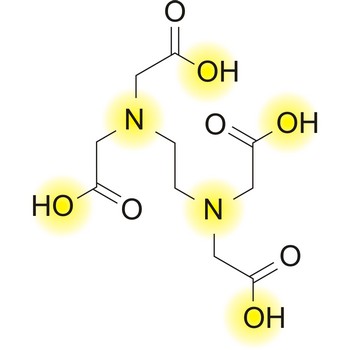