Autoignition temperature is the minimum temperature required to initiate or cause self-sustained combustion in any substance in the absence of a spark or flame. This varies with the test method.

The Ecological Footprint is defined as the area of productive land and water ecosystems required to produce the resources that the population consumes (food, fiber, timber, energy, and space for infrastructure) and assimilate the wastes that the population produces (CO2 is the only waste product currently included), wherever on Earth the land and water is located. It compares actual throughput of renewable resources relative to what is annually renewed. Non-renewable resources are not assessed, as by definition their use is not sustainable.

Ecological footprints and biocapacity are expressed in global hectares (gha). Each unit corresponds to one hectare of biologically productive space with world average productivity. In U.S. Footprint results are often presented in global acres (ga). One U.S. acre is equal to 0.405 hectares.

Humanity is currently consuming renewable resources at a faster rate than ecosystems can regenerate them and continuing to release more CO2 than ecosystems can absorb. In 2007, humanity's Footprint was 18 billion gha, or 2.7 gha per person. However, the Earth's biocapacity was only 11.9 billion gha, or 1.8 gha per person. This represents an ecological overshoot of 50 per cent. Put another way, people used the equivalent of 1.5 planets to support their activities (more developed countries generally make higher demands on the Earth's ecosystems than poorer, less developed countries).

From Environment protection law of the Republic of Croatia: By protection of the environment, the following is ensured: complete preservation of environment quality, natural community preservation, rational usage of natural resources and energy in the most favourable way concerning the environment as a basic condition of healthy and sustainable development.

Lactic acid is an acid produced as a result of anaerobic respiration in muscles and red blood cells, i.e. when glycogen is used as an energy source for respiration rather than oxygen. After production, it is converted back to glycogen in the liver. The build up of large amounts of lactic acid in the blood can lead to stress and toxic effects. High levels are usually a result of sustained, excessive exercise.

Nuclear reactor is an assembly of fissionable material (uranium-235 or plutonium-239) designed to produce a sustained and controllable chain reaction for the generation of electric power. 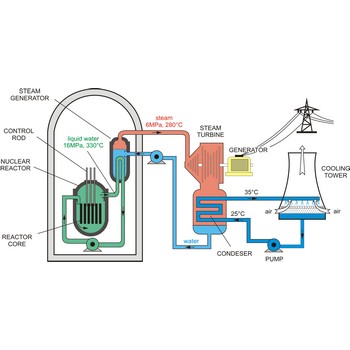 The essential components of a nuclear reactor are:

Evangelista Torricelli (1852-1908) is Italian physicist and mathematician. He became the first scientist to create a sustained vacuum and to discover the principle of a barometer. He filled a tube three feet long, and hermetically closed at one end, with mercury and set it vertically with the open end in a basin of mercury, taking care that no air-bubbles should get into the tube. The column of mercury invariably fell to about twenty-eight inches, leaving an empty space above its level. He discovered that the variation of the height of the mercury from day to day was caused by changes in the atmospheric pressure. He also constructed a number of large objectives and small, short focus, simple microscopes.