Extraction is the separation of a component from its mixture by selective solubility. When a solution of one substance in one solvent is brought in with another solvent dissolved substance will distribute between the two solutants because of different solubility. Extraction is an efficient and fast method used for separating and concentrating matters. Extraction is best done several times in a succession, with smaller amount of solvent in it the matter is better dissolved. For example, caffeine can be separated from coffee beans by washing the beans with supercritical fluid carbon dioxide; the caffeine dissolves in the carbon dioxide, but flavour compounds do not. Vanillin can be extracted from vanilla beans by shaking the beans with an organic solvent, like ethanol. 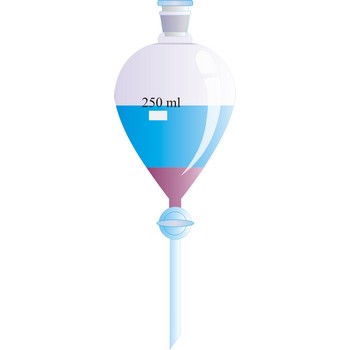 Pickling is a process to chemically remove scale or oxide from steel to obtain a clean surface. When applied to bars or coils prior to bright drawing, the steel is immersed in a bath of dilute sulphuric acid (w(H2SO4) = 10 %) heated to a temperature of around 80 °C. An inhibitor is added to prevent attack and pitting of the cleaned metal. After pickling, a washing process takes place followed by immersion in a lime-water bath to neutralise any remaining acid.

Volumetric flasks are bottles made of glass, in a pear like in shape with long thin necks and flat bottoms. All come with a ground glass stopper for a tight seal. Volume marking is cut in glass with fluoride acid around the neck, so that parallax should be avoided (flask is put in front of the eyes so that one can see only a straight horizontal line). A volumetric flask is calibrated to contain (TC or In) the indicated volume of water at 20 °C when the bottom of the meniscus is adjusted to just rest on the center of the line marked on the neck of the flask. They are used for preparing the exactly known volume of sample solution and standard solutions of reagents. On each flask with volume designation a temperature on which the flask has been calibrated is designated. 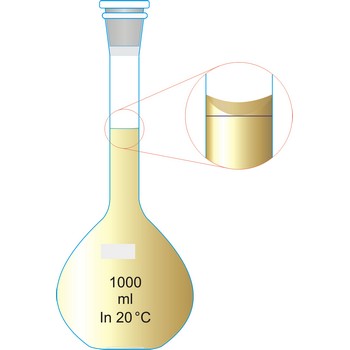